OUR MISSION, OUR OBJECTIVES, OUR DREAMS !

The purposes for which the organization is formed are charitable, educational, developmental, and specifically as follows:

1. To promote unity, culture, patriotism and solidarity among all Uromi indigenes in the USA.

2. To identify and implement proposals/programs that are geared towards the development, progress and beautification of Uromi City.,

3. To serve as a progressive group for the aspirations of Uromi people both at home and in diaspora.

4. To provide a forum for social and cultural interactions among members.

5. To co-operate with any other social organizations both at home and abroad having similar aims, goals and objectives as the Association.

Notwithstanding the foregoing, the Association shall not participate in political campaigns, endorse candidates or engage in any conduct that will violate its Articles Of incorporation, corporate or tax exempt status, if any, under the internal Revenue Code, or the Laws of any jurisdiction.

How National Association Of Uromi Sons & Daughters, NAUSDA, Was Formed.

The National Association of Uromi Sons and Daughters-USA was established in 2008. The original idea to have an umbrella organization that would serve as a cover for all Uromians in the United States of America was first mooted simultaneously by Mr. Stephen Oseghale of New York and Prince Ralph Okojie of North Carolina during the period, 2006-2007. All initial efforts to actualize this noble idea were unsuccessful. But in 2008, however, Mr. Adams Ebhomielen of New York resuscitated and implemented the idea. This feat was accomplished through the cooperation and commitment of 12 Uromians– namely, Ben Etiobhio; Charles Usigbe (Nevada); Greg. Enaholo, Mrs. Theresa Enaholo, Mike Enaholo, Ken. Ilenikhena (Chicago); Sunday Odua, Napoleon Akhuemokhan, Fidelis Omigie, Ignatius Iyere, Isaac Ehikioya and Adams Ebhomielen (New York)– who answered his call to attend a teleconference meeting scheduled for October 17, 2008. At this inaugural meeting, the participants, in their infinite wisdom, saw the need for, and unanimously agreed to, the formation of a body that would bring all Uromians in the U.S. together.
Subsequent monthly meetings held from November 2008 to June 2009 attracted more and more Uromians to the group which was then able to produce the name, motto, logo, constitution, group e-mails, membership directory and website domain for the new group, National Association Of Uromi Sons And Daughters USA.
At the special conference convened for July 4, 2009 in New Jersey, the Association’s Constitution was formally adopted. Also, a 5-man Caretaker Committee, comprising of Messrs. Ben Etiobhio (Dallas);
Mike Ewah (Houston); Sunday Odua (New York); Lawrence Ayewoh (Maryland) and Pastor Ehi. Oboh (New Jersey) was set up to, amongst other things, oversee the activities of the Association, conduct the national elections within a year and set the time and place for the First Convention.
To all sons, daughters and lovers of Uromi, NAUSDA is given for you to love, keep, nurture, sustain and positively employ to impact lives here in the U.S. and at our home town, UROMI.

*Login – (For Members Only) 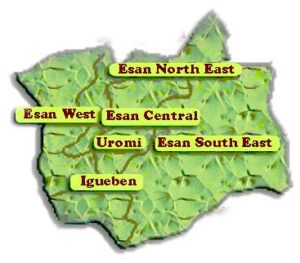 UROMI
The correct name is URONMUN Uronmun is the largest and most populated town in Esanland. Uronmun was formed by two waves of settlers from Benin between 900 and 1400AD; during the reign of the OGISOS, and 1460, during the reign of Oba EWUARE. These early Benin settlers were either fugitives fleeing persecution and the harsh rule of the OGISO or were criminals hiding in the dense jungle escaping justice. The founder of the first settlement in URONMUN was EGBELE, the second son of OAKHA, one of Oba EGBEKA’S wives. (1370-1400), Oakha’s other two sons- ASOKPODUDU and the third brother settled in UZOZOGHAINGHAIN of Idinegbon-UZEA. The second wave of organized mass emigration from Benin, was around 1460, during the reign of Oba EWUARE the selfish. His attempt to stop the emigration of BINIS to the present day ESANLAND was the MOAT he built around the city. Most of these immigrants during this wave were from IDUMOZA of Benin City. Uronmun, is divided into three groups recognized as: OKHIODE, OBIRUAN and OBIYUAN. OKHIODE consist of: Eguare Egbele, Onewa, Utako, Unuwazi, Arue. OBIRUAN consist of:: Ebhoyoman, Efandion, Ekhue, Ubierumun, Eror, Obeidu, Uwalor, Idumoza, Ivue OBIYUAN consist of: Ukoni, Amedeokhian, Awo. The leader of the second wave OGHU and his followers settled in IVUE. In 1463, Oba Ewuare decided to relinquish the futile attempt to force the fleeing BINS that settled in Esan. He decided to confer on the various community leaders the title of ENIJIE. Oghu could not attend. He dispatched his junior brother, ICHESAN to attend. According to the Oba decree, all attendees were made IJIE and the title is not transferable. Upon return to Uronmun, to avoid embarrassing his older brother, ICHESAN moved from IVUE to present day EGUARE. ICHESAN was succeeded by AGBA to IKENOA to EHENOA to IKHIVABHOJERE to OKUOYE to AKHIZE to IKHIMIGBALE to UWAGBO to EDIALE to AKHILOMEN to OKOLO to OKOJIE (OGBIDI) to UWAGBALE to EIDENOJIE OKOJIE II to OMELIMEN EIDENOJIE I to ANSLEM EIDENOJIE II.

There are no upcoming events.